In my Part I post about the Peter Campbell clinic, I went into some detail about how the best clinicians bring a very clear presence into the arena.
Horsemanship
May 14, 2013 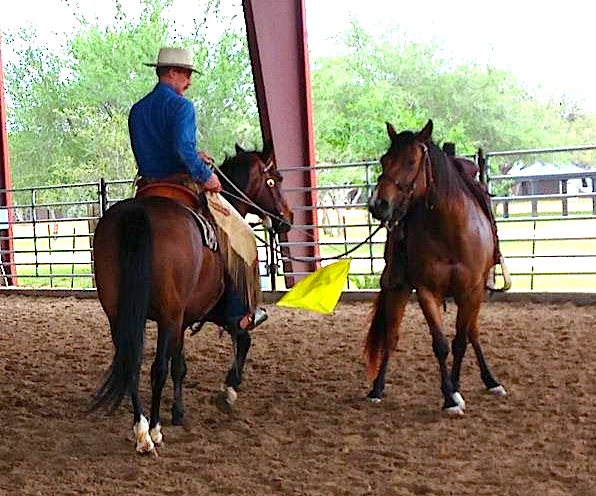 In my Part I post about the Peter Campbell clinic, I went into some detail about how the best clinicians bring a very clear presence into the arena. Another aspect of Peter’s presence I noticed was how dedicated he was as a teacher. Nearly all the clinicians I have ridden with are committed to their work. They are patient and emotionally disciplined — punctuating their more “direct” comments with humor and a desire to support their clinic students. The best clinicians tend to travel frequently, crisscrossing the US for most of the year.

That might sound glamorous, but it wears pretty thin after the 1,000th mile or so. The income isn’t as high as you might think either — after the cost of diesel fuel alone is subtracted (let alone all the other expenses). You drive your own rig, so you are working even on the travel days between clinics. There are no sick days, or bad weather cancellations. You get there on time (no matter what) and teach the clinic. And you are happy to do it — because of the horses and people that you can help (and what they teach you in return).

It’s a fairly epic career commitment. And it takes a clear and compelling purpose to do it year after year. Plus being a clinician is usually the second career for these folks — with many years as working cowboys in the saddle, colt starters and all-around hands preceding their clinician lifestyle.

It was one of those quietly impressive moments. Nothing big or dramatic happened. But it epitomized to me the character of a teacher like Peter Campbell — and explained why his presence is so reassuring to horses.

So that’s the basic package most traveling clinicians bring with them to every clinic. I noticed that Peter would also put in extra effort above and beyond that. He taught three classes (Horsemanship, Cow Working and Colt Starting) each day with only a 90-minute lunch break. He answered questions patiently after each day was finished. Two of the colts had tension issues — and Peter worked with them personally, to help them make the bigger changes they needed.

One filly required a 45-minute session with Peter steadily supporting her with his flag, his horse, and his overall handling. It was the type of session that would have exhausted someone like me — but Peter took it in stride, saying that the filly was more of a “2” than a “10” on the troubled scale.

After the third day’s classes were over, Peter schooled his greener clinic mount in the arena while several clinic students lingered to watch. After a lengthy session of helping the horse understand why it was important to mentally stay “with” Peter, he began riding out of the arena to a much-deserved dinner break. It was now past 7 pm, after a long day of teaching, riding, colt handling and cow working.

One of the students then approached Peter with several questions and concerns. Peter reined his horse and talked patiently with the student for another twenty minutes or so. He never expressed any sign of frustration — nor did he ask to take a break, grab some food or unsaddle his horse. He gave his full, uninterrupted attention to the student — who truly needed that from Peter — and only rode off when the student was ready for the talk to end.

It was one of those quietly impressive moments. Nothing big or dramatic happened. But it epitomized to me the character of a teacher like Peter Campbell — and explained why his presence is so reassuring to horses.

My lingering confusion about how I managed to take a fall during the first post-track ride on a young ex-racehorse was resolved after this clinic. It is a long story (and will be covered in detail for another blog post), but essentially I was mounting a very nice young horse when evidently at some point all hell broke loose. I was briefly knocked unconscious and thus had a small memory gap — I wasn’t sure entirely what had happened. Did a tree fall in the woods and scare the horse? Or did I accidentally startle the horse somehow?

I knew I had obviously missed some key signal from the horse, but what was it? After watching Peter work with the anxious filly, I realized what I had overlooked. Instead of seeing the whole picture of how the young horse was doing mentally, I had mechanically looked at the fact that he licked and chewed (not realizing how tentatively he did that) — and mistook his absence of presence as softness (rather than fear).

I am finally learning that horses truly prefer horsemen to trainers — and that it is better to be a student of the horse than to master every training technique in the book.

Most ex-racehorses who are fearful show it rather dramatically — but every now and then, a horse will bury his anxiety so deeply that it shows only in small (but very important) signs. While I missed those signals, I did notice how invisible the horse’s presence seemed (it was if I was alone in the pen) — and attributed that to quietness. I paused at that moment — because it seemed strange to me — but then brushed aside my doubt as being silly.

For much of my career at LOPE, I have been somewhat embarrassed by my lack of “professional” technique. But over time, I am finally learning that horses truly prefer horsemen to trainers — and that it is better to be a student of the horse (and aim toward being a horseman) than to master every training technique in the book. Peter’s work with the colt reminded me of this again — and allowed me to settle my unanswered questions from my own troubled ride last year.

The source of my puzzle as to whether to keep working with horses (as opposed to simply enjoying them as a personal hobby) was based on the usual ups and downs many people experience in horse-related work. Sometimes, people in the horse world can have those “interesting” personalities we all have encountered. Working in the horse adoption charity arena can also be fraught with many challenges — such as raising funds, creating a clear mission focus, managing a diverse herd of ex-racers, setting quality horsemanship standards, avoiding excessive use of unicorn sweatshirts and so on. In sum, I was a little fatigued with some of the more difficult aspects of the work.

Most of all, I was wondering if I really had something to offer the horses anymore (in terms of “hands on” work). After ten years at LOPE, I had hit nearly all of my original (and modest) goals with the work there. Was it time to settle down like a grownup, maybe hire someone else to run LOPE’s horse operation, and focus instead on getting a “normal” job (you know, one that actually pays more than minimum wage)?

Shouldn’t everything be getting easier (instead of more challenging) as people grew deeper into their chosen careers? Would I ever NOT be disheveled at the end of the day, trailing epic amounts of hay, dust, horse hair, beeping text messages and worn leather behind me? Would I ever choose something that is simpler to achieve in the horse world (such as settling on a specific discipline and really learning it well)?

As an aspiring horseman, I will encounter things I haven’t seen before. That is a given, and is part of the package toward the big goal I have chosen. I will be imperfect, at times even remedial — but I will continue to progress, however slowly, toward that ideal. The horses are that important to me.

After attending three clinics that were deeply significant to me — with Tom Curtin, Buck Brannaman and (especially) Peter Campbell — the answer to the above questions is now clear (it’s no).

The amount of commitment and dedication that these clinicians give to their work is beyond impressive. It is not an easy job — in fact, it isn’t really a career at all. It is more of a vocation, which by definition has much different standards for success than a traditional career path. It was inspiring to learn from these clinicians — and it made me see how much philosophy and purpose is behind their work. Although I am a very basic student in many ways, I still want to be part of that same field — even if I will only be in the most “entry level” category for my entire life.

As an aspiring horseman, I will encounter things I haven’t seen before (like the young horse last summer) — that is a given, and is part of the package toward the big goal I have chosen. I will be imperfect, at times even remedial — but I will continue to progress, however slowly, toward that ideal. The horses are that important to me — another fact I rediscovered during my clinic experiences (even though that I find that fact pretty baffling at times).

After all, there is no history of ranching, show jumping, colt starting, or horseback riding of any kind in my solidly suburban family lineage. But sometimes you can’t predict what will grip a person’s imagination and give them purpose in life. For me, it turned out to be horsemanship — in spite of how unlikely a match that should have been to my background and upbringing.

My career in horsemanship is quiet and humble — there will be no spectacular accolades or world tour demonstrations. I will always be in the “0 to .1” category that Ray Hunt talked about. But even though I will never be in the Legacy of Legends or compete in the Californios, I can still contribute in my small way to the field — and help some really deserving ex-racehorses along the way.

That’s my job. And I plan to never retire from it. Because I love the work too much to ever stop learning how to do it better.

I’d like to thank Tom Curtin, Buck Brannaman and Peter Campbell for their help and inspiration — and I hope all three of you plan to never retire as well. 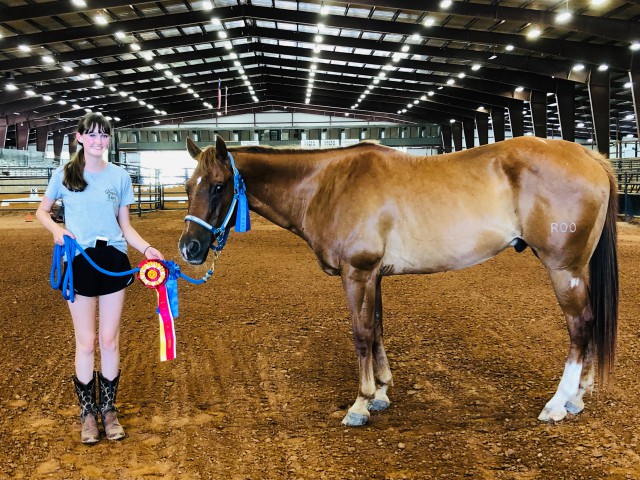 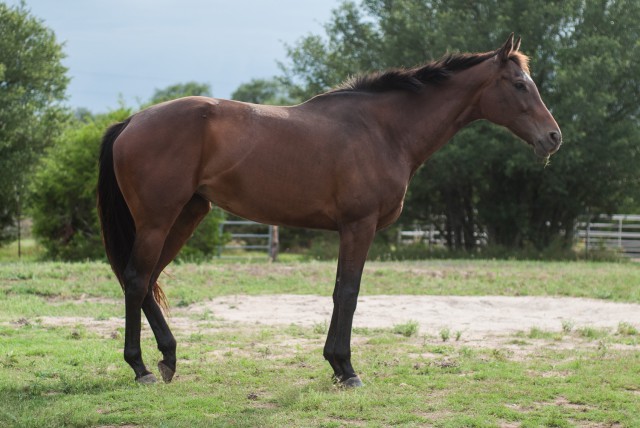 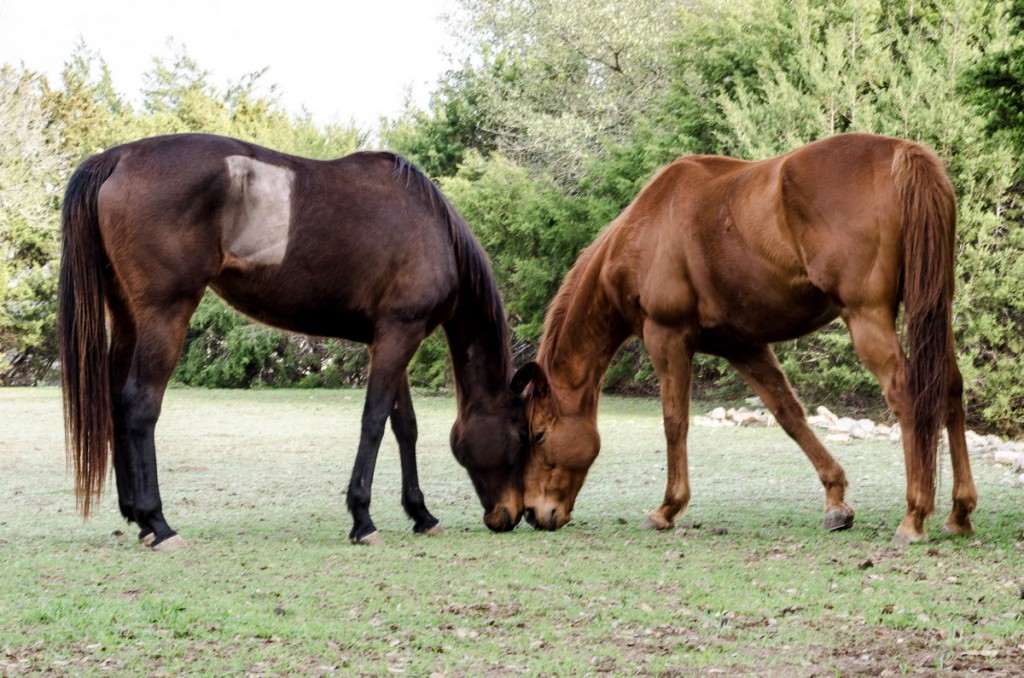 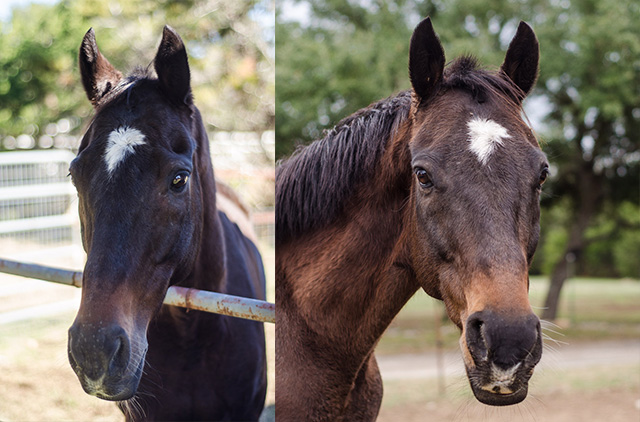